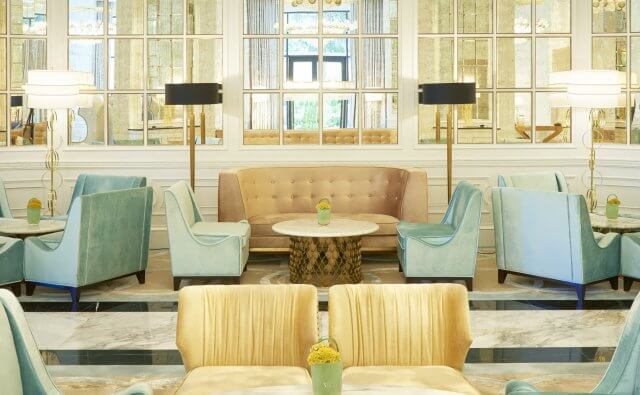 Amman, the capital of Jordan, is a city of contrasts, offering both ancient ruins and thriving modern life. The city was built in an ideal location, situated on the hilly area between the desert and the fertile Jordan Valley. Begin your tour by stepping back in time with a visit to The Citadel – a reminder that Amman has been inhabited for thousands of years, and was once a major Roman city. Although not as impressive as the Colosseum in Rome or the Acropolis of Athens, the Citadel does impose on the modern city’s landscape, and provides a constant reminder of the rise and fall of civilisations. The Citadel is home to a small but extremely interesting museum which is well worth a visit, before exploring the modern aspects of the city and understanding a little about how modern Jordanians live, shop, eat, work and pray in this large, modern city. 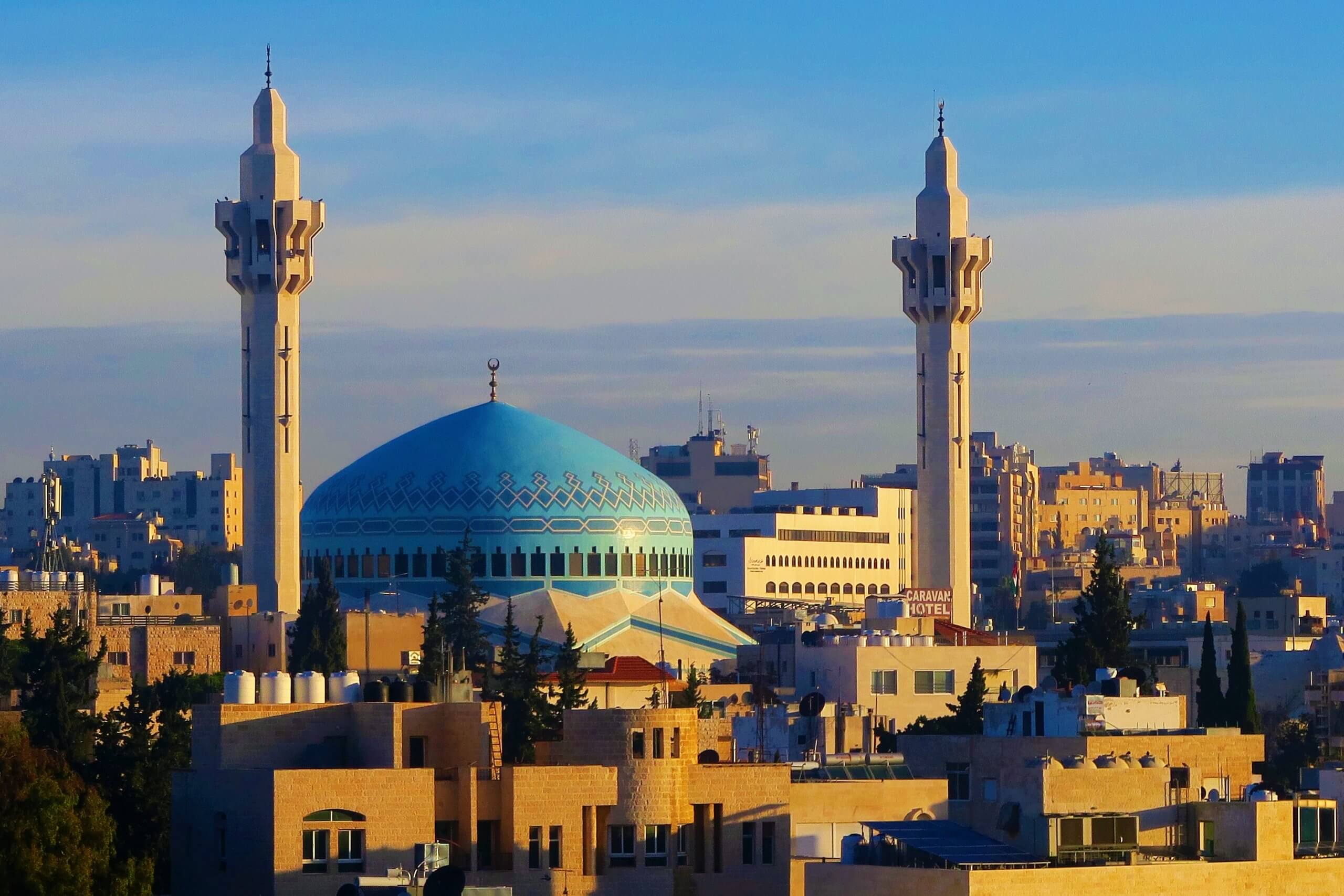 Middle Eastern food is a major highlight of travelling the region, and our Amman based street food tours are not to be missed in order to get off the beaten track and switch on your taste buds. Spices feature heavily including the heavenly zaatar, and plenty of thyme. There are plenty of vegetarian options such as hummus, falafel and local cheeses, as well as traditional grilled meats for those so inclined. Arab sweets tend to be very sweet, but the halva and kunafa are definitely worth a go and are delicious with strong, bitter Arabic coffee. Many will be surprised to know the although Jordan is a Muslim country, there is a long history of wine making and we will be happy to introduce you to a sip of the local nectar – just for cultural reasons of course!

In order to stretch your legs and submerge yourself in nature, we recommend visiting to the Aljoun Forest Reserve.  This wooded area is a rarity in Jordan, it has a Mediterranean climate and is home to a great variety of flora and fauna including the reintroduced roe deer and a large number of bird species.   We especially like the Soap Trail which is a gentle forest walk of about two or three hours and seven kilometers through evergreen forest trails, pistachio trees, oaks, and fruit trees, which gives way to wonderful view points onto the wider landscape and local villages providing a glimpse into how many people still live in this region.  Focusing on the local aspect, the trail brings us out into the little village of Orjan where the village ladies make their own soap out of local ingredients and pure olive oil.  These exotic smelling soaps are a great gift to take home which also support local communities.We recommended to do visit early in the morning. 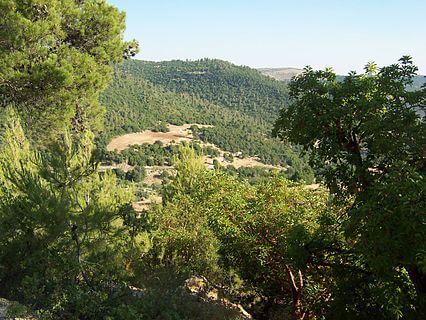 Aljoun castle is worthy of a visit while you explore the North of the country.  Aljoun castle dates back to the twelfth century, and while it might look a lot like a Crusader castle, and is indeed from the Crusader period, it was actually built by the other side – one of Saladin’s Islamic generals who used it to fight against the European forces and local Bedouin who had allied themselves with the invaders.  The castle was later expanded and improved by the Mamluks in the thirteenth century.  The castle is well preserved and invites exploration of its many chambers, staircases and view points. 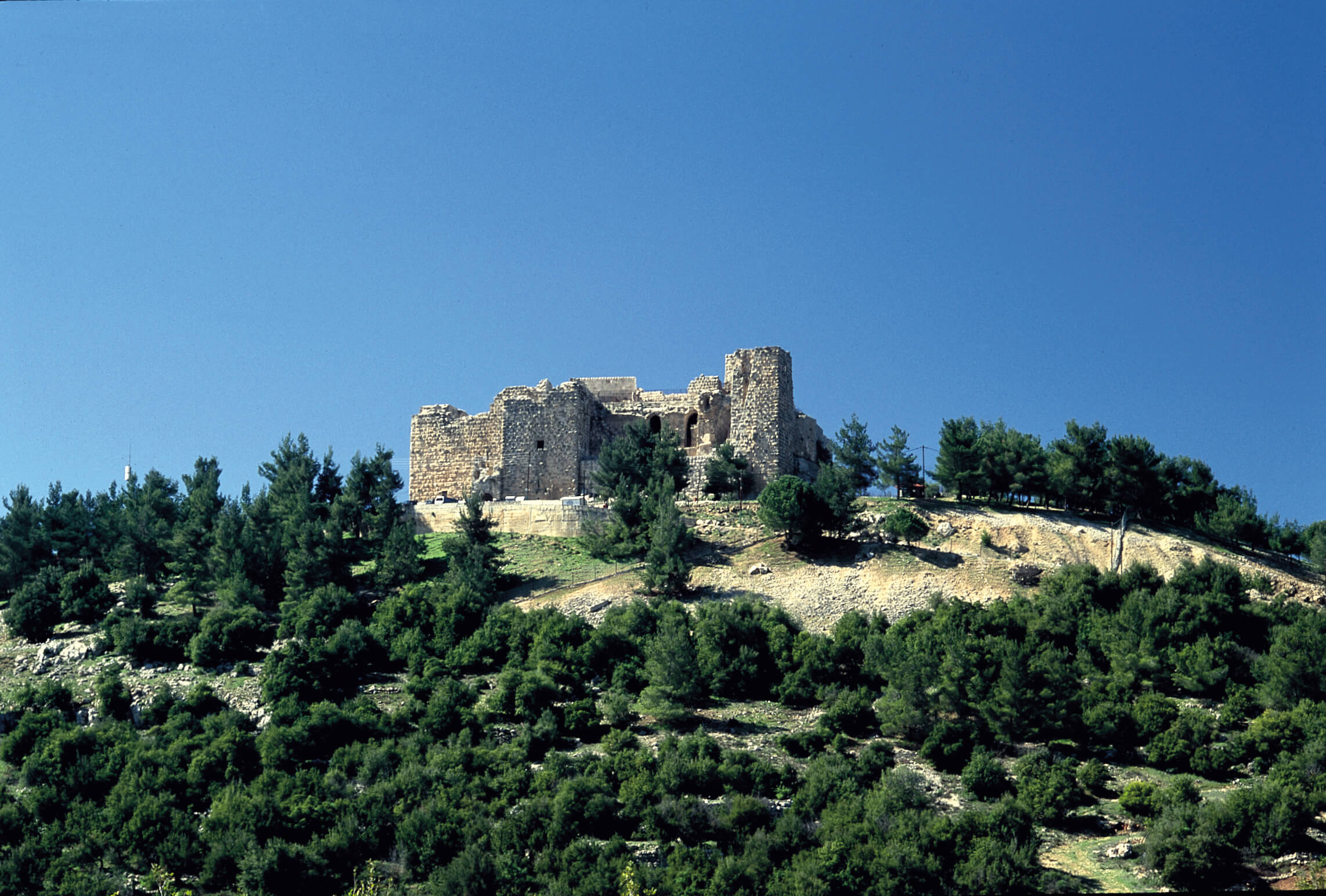 Second only to Petra in tourist appeal, the ancient city of Jerash is remarkable for its long chain of human occupation. Here at a well-watered site in the hills of Gilead, remains from Neolithic times have been found as well as Greek, Roman, Byzantine, Umayyad and others. Jerash’s golden age however, arrived with Roman rule. Jerash was a member of the Decapolis, a dynamic commercial league of ten Greco-Roman Cities. Today it is acknowledged as one of the best-preserved province cities of the Roman Empire. When Emperor Hadrian visited Jerash in 129 AD it was already thriving. To honor its guest, the city raised a triumphal arch. Today you can walk beneath the imposing south gate and then make your way up the ‘Street of Columns’ – the Roman road running 600 meters north from the Oval Plaza. As you step over the tracks of chariot wheels, still visible in the paving stones, you are invited to imagine prosperous citizens window-shopping beneath a covered sidewalk, and as you visit the theatres you can imagine the throngs of crowds enjoying dramas unfolding before them. Jerash is a large site, so come prepared to not only learn, but also walk! 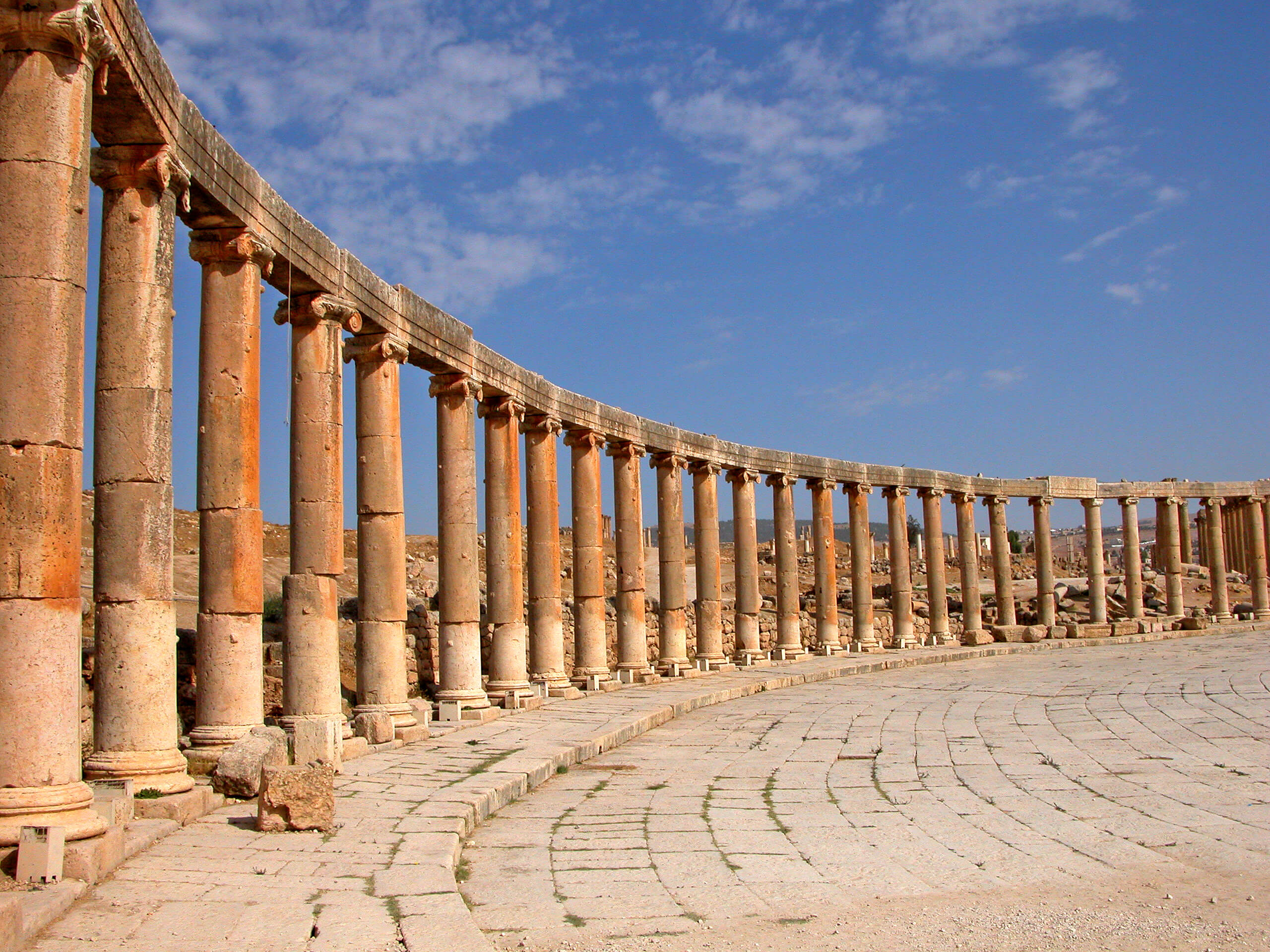 This morning you will depart your hotel in Amman and travel South with your guide and driver to Petra.  En route you will visit Madaba. South of Amman you will find Madaba, affecionately called the “City of Mosaics” by those who know it – the sheer quantity as well as the quality of the mosaics has ensured Madaba its place on the visitors’ map. Madaba is in fact a 4000 year old archaeological site, and takes in monuments such as St. George’s Church which is home to the famous ancient mosaic map of the Holy Land. You will view the detailed map of sixth century Jerusalem, Madaba’s main attraction, and time allowing you will also visit the Church of the Apostles with its beautiful mosaic depicting the sea and her creatures. 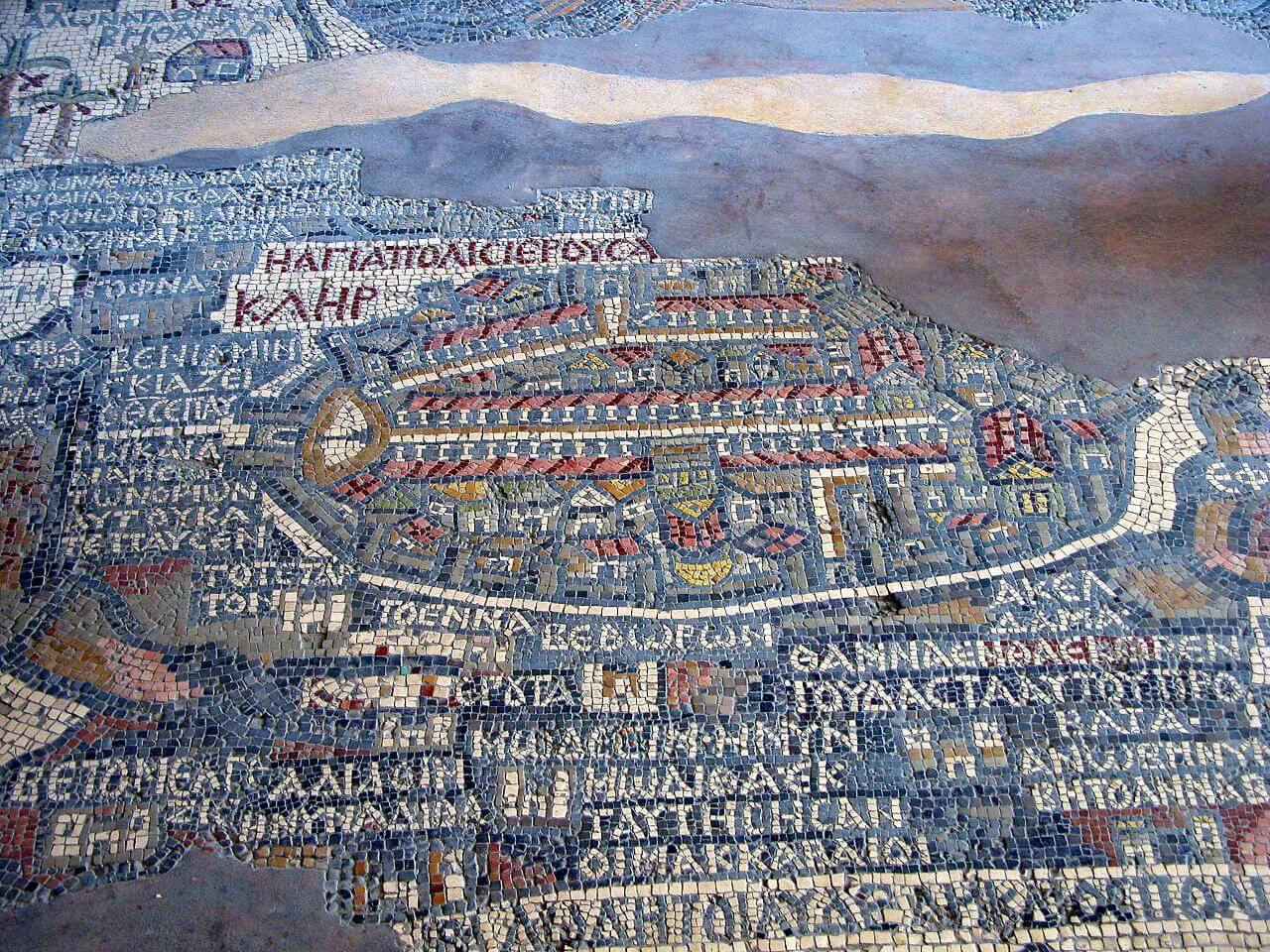 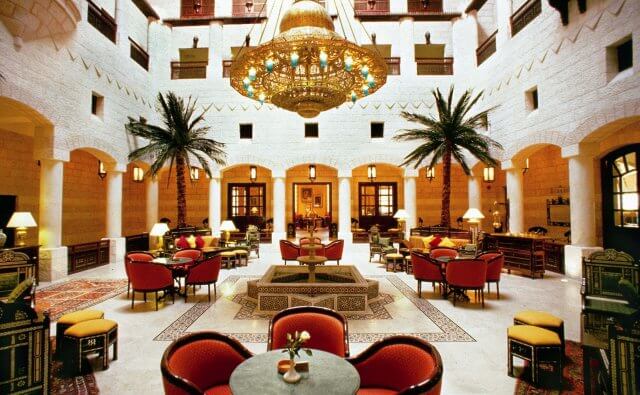 As well as being a treat for history and archeology lovers, Petra is an outstanding destination for those who love to hike through wild desert scenery and seemingly stumble upon world class ruins. If this resonates with you, we recommend starting at Little Petra, a separate archeological site which has also been awarded UNESCO world heritage status and is well worth visiting, particularly for its beautifully decorated ‘dining room cave’ with wall and ceiling paintings depicting wine and vines. You then trek the three to four hours through the wilderness of the sandstone mountains, dramatic scenery around you at every turn, until eventually you approach Petra at the monastery. Your private guide will escort you through the site in the opposite order to how most people do this – arriving at the monastery you will end at the Treasury and then the Siq. Along the way your guide will reveal and explains the highlights of the Nabatean city, including the stunning Treasury, the theatre, the tombs and facades and the colonnaded street. Full historical background will be provided, together with information about the Nabatean civilisation. If you are particularly interested in archeology please let us know as we will have an expert archeologist join you and reveal not yet published information and artefacts from the Petra site, as well as plans for its future. 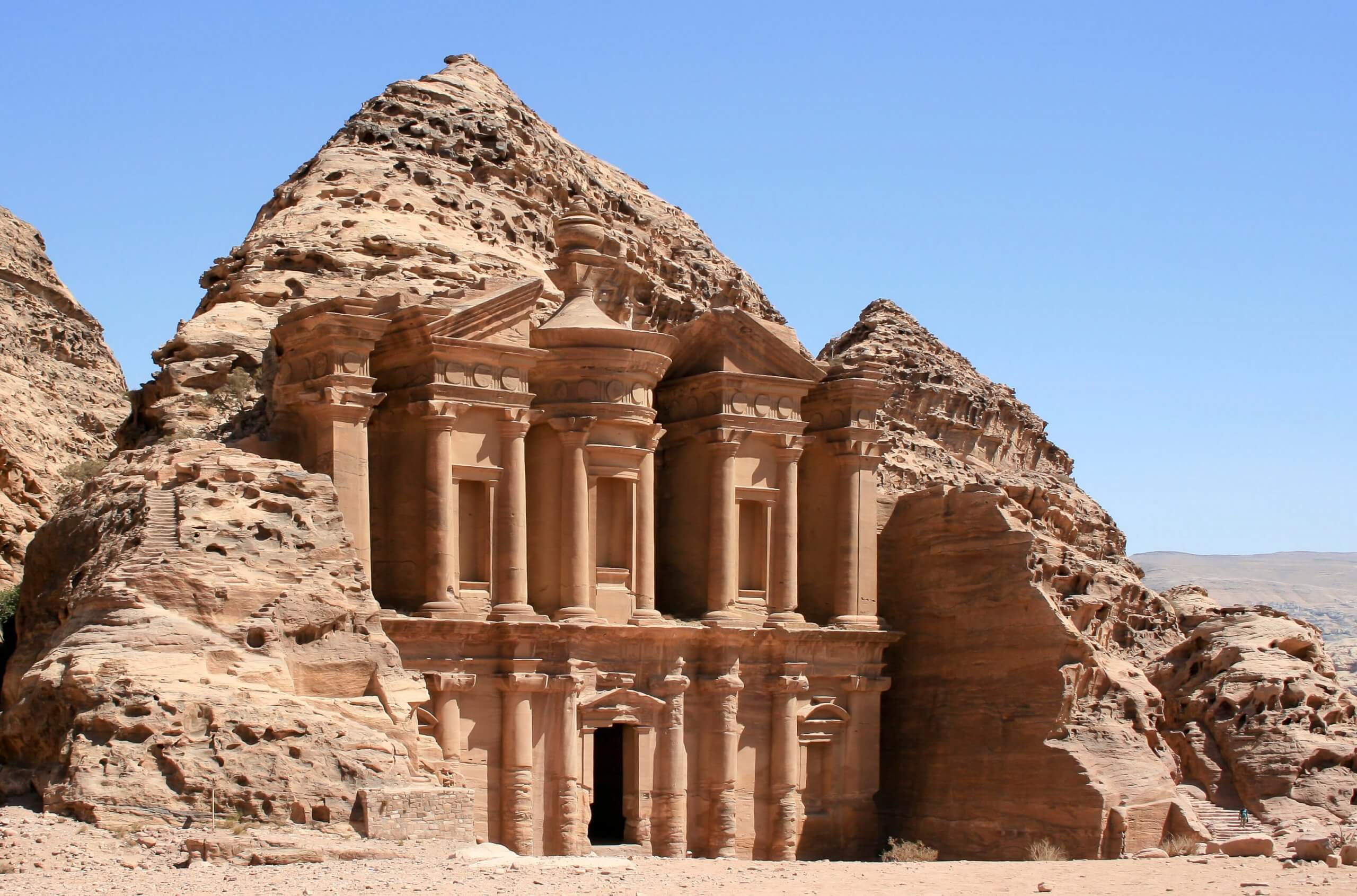 This authentic Arabic home and culinary experience offers the chance to chop, cook, learn and dine. You will learn about the Arabic kitchen and how to prepare a traditional Arabic meal with the help of some pretty experienced kitchen hands! Petra has long been the centre of the world of spices and the spice trade itself, so expect a focus on these colourful and aromatic additions. As you chop and cook you’ll have the chance to chat with locals and learn more about their way of life. Most importantly you will then get to eat the food that you prepared, an excellently well deserved and delicious meal!

This morning you will depart your hotel in Petra and travel South with your guide and driver to Wadi Rum. Bedouin camps are evident in the Wadi, which is still home to a number of Bedouin families, and you will have the opportunity to learn about this way of life, so different from ours. The best way to learn about these amazing and hardy people is to spend time doing with the Bedouin inside their environment, and of course to break bread with them. You will have the opportunity to talk to them and ask plenty of questions. You will be well deserving of your delicious traditional Bedouin meal by the time it comes – the food is truly a treat but please note that authentic Bedouin camps are extremely basic (there may not be bathroom facilities), and you will be invited to sit on the floor as is customary. Men are not permitted to sit inside the women’s camp, so couples will be invited to sit in the men’s tent. 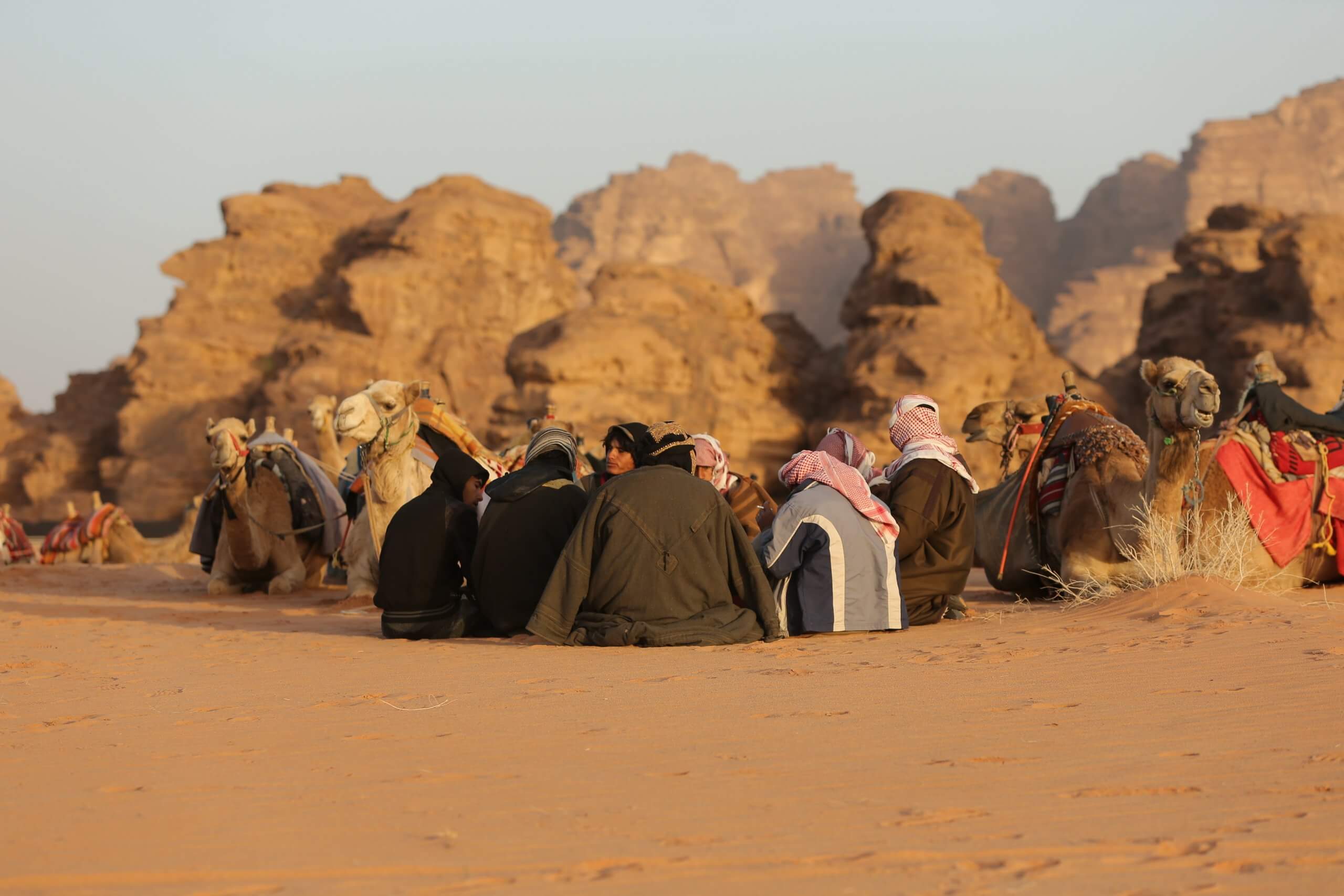 Wadi Rum offers extraordinary desert landscape, and one can well understand how T.E. Lawrence was inspired by the seemingly endless rolling colours and shapes of sand and rocks which surrounded him, and in which the famous film Lawrence of Arabia was later filmed. The best way to enjoy Wadi Rum is to fully immerse yourself in the desert, and the best way to do that is to head out in a jeep! Enjoy an adventurous jeep tour inside the beautiful desert with a local Bedouin guide, marveling at the endless sandy expanse and interesting rock formations. You will have a chance to ask your guide about his way of life, Bedouin traditions and desert survival – all of which is so different from the way we live. 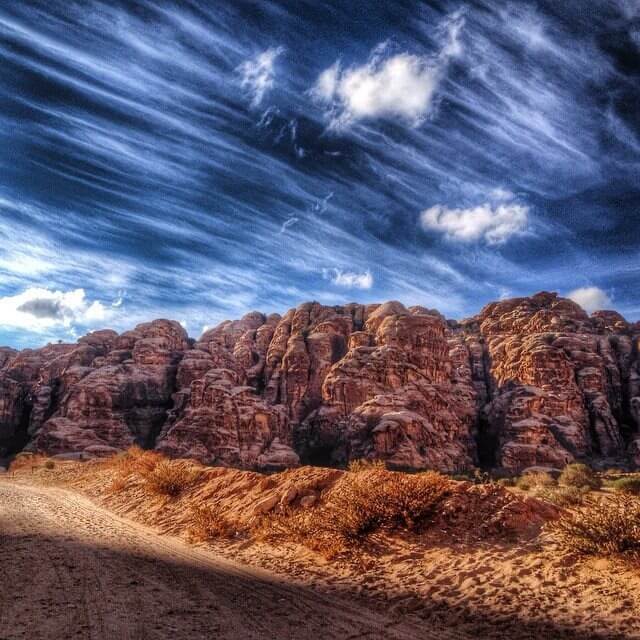 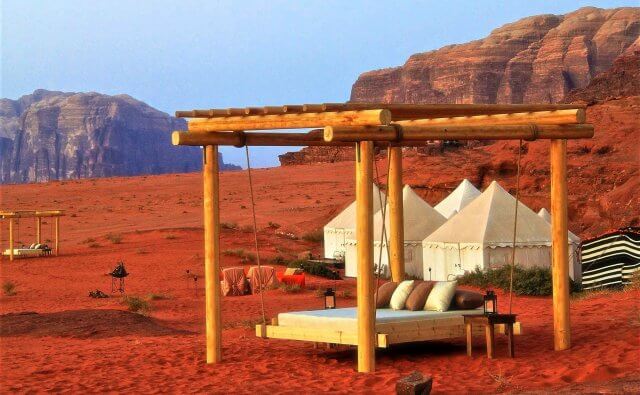 Wadi Rum and the Dead Sea

This morning you will have a very special start to the day with a sunrise hot air balloon ride! See the infinite wilderness of Wadi Rum from a different perspective high up above the sandstone rock. 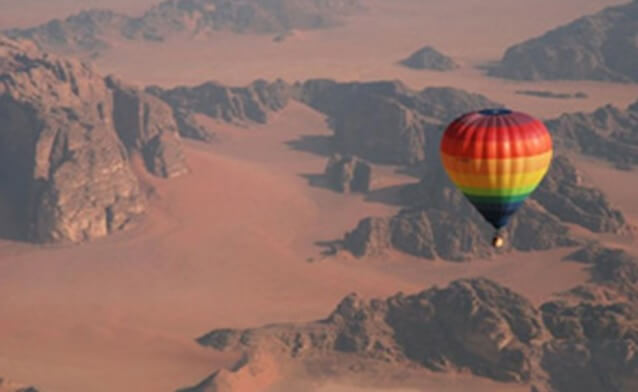 After the spectacular ride you will leave Wadi Rum and visit the Dana Biosphere on route to your hotel in the Dead Sea.  The Dana biosphere area is the largest national park in Jordan and takes in a huge array of landscapes and biodiversity.  Arriving at the Dana nature area you will meet your local guide and stretch your legs hiking the Nawatef Trail which is about two kms long and takes about two hours to hike.  This circular trail begins from the Al-Barrah area and takes you to the scenic mountains, springs and ancient ruins in the Nawatef area. 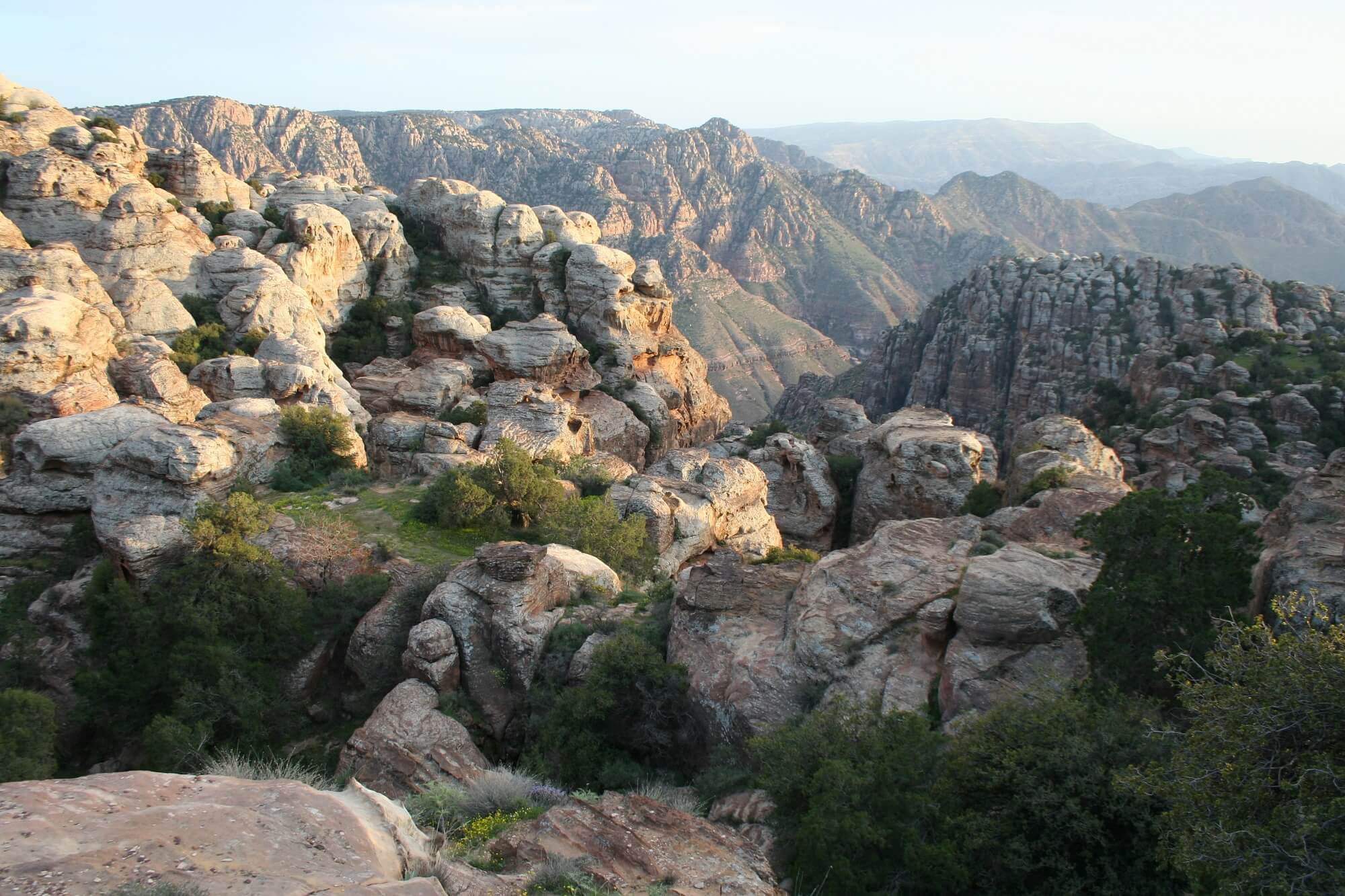 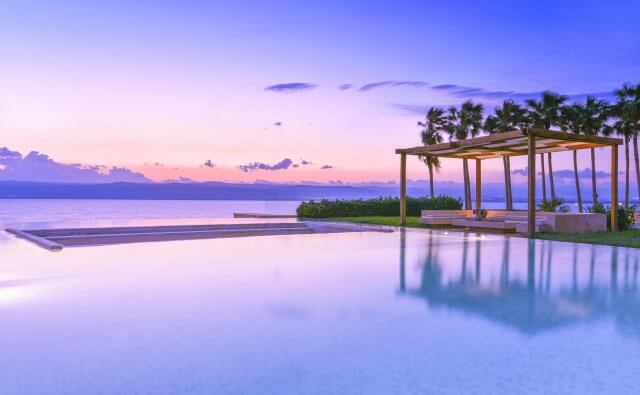 Today is at your leisure to enjoy the relaxing atmosphere and mineral rich air of the Dead Sea, and to take advantage of the spa facilities at your hotel. Full of good-for-you minerals and surrounded by air which is naturally rich in oxygen, the Dead Sea should leave you feeling full of energy. Best of all, here you really will float! Please take flip flops along for the Dead Sea and avoid taking your best bathing suits as the minerals in the water may damage the material. 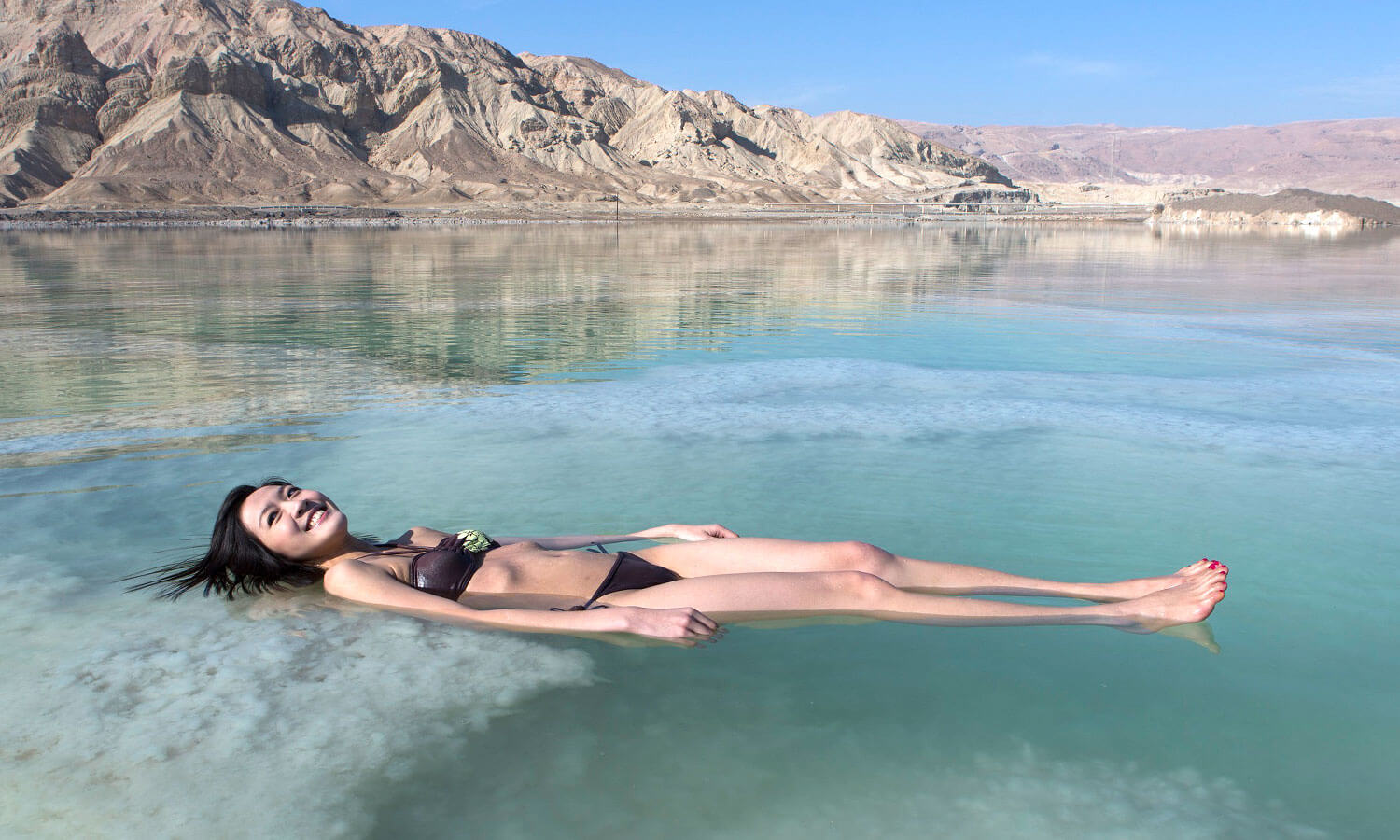